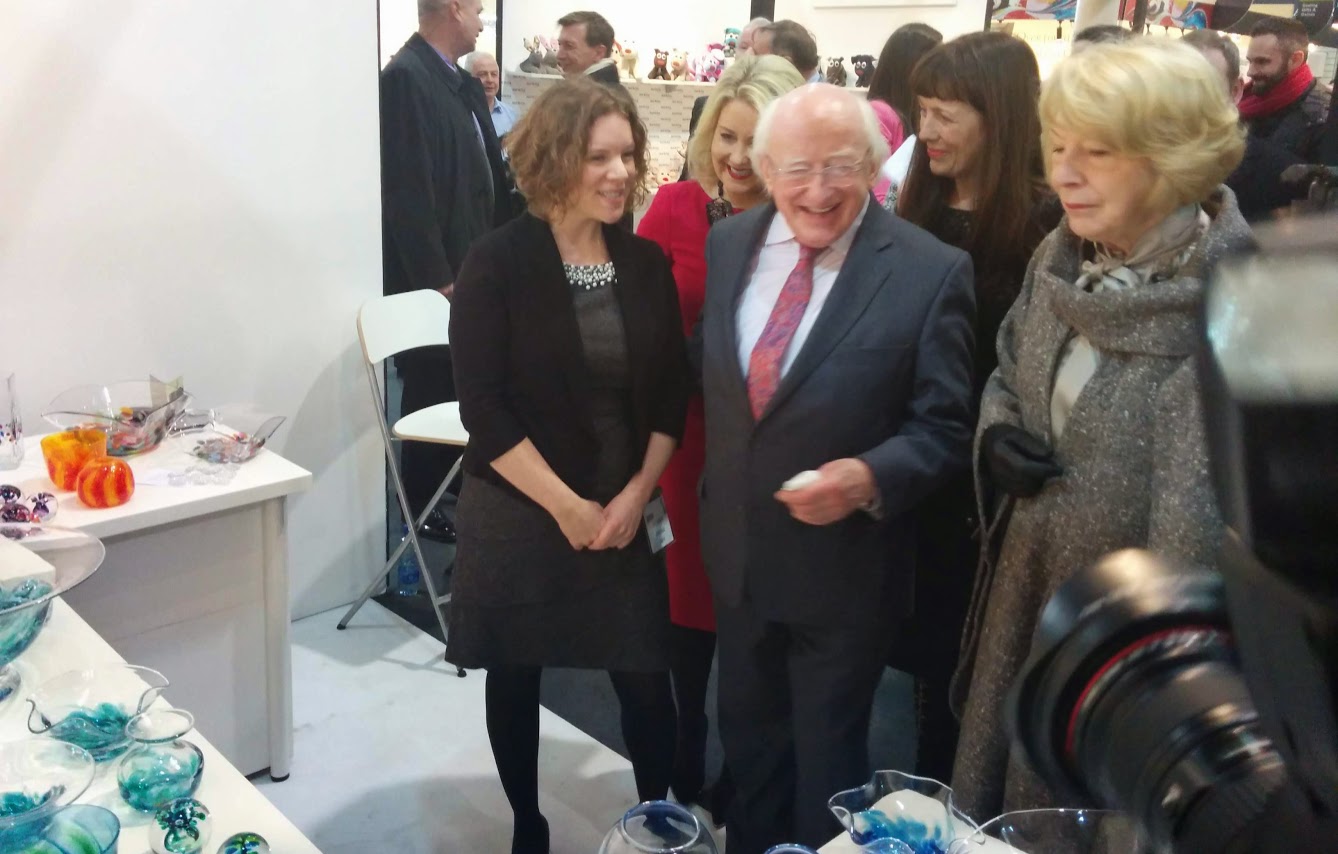 January at Jerpoint mean one thing: Showcase Ireland! As Ireland’s largest creative expo this a great opportunity for us to launch our new collections for the New Year, be inspired by our crafty counterparts exhibiting at the show and meet with customers old and new.

We also had a special visitor at Showcase this year; an audience with The President of Ireland, Michael D Higgins and his wife Sabina.

As patron of Year of Irish Design 2015, President Higgins was there to launch Showcase and was due to arrive at 11am sharp. He was to meet five pre-selected craft makes within Creative Island, a dedicated area for Irish craft. The artisan select for this prestigious visit were, Jerpoint Glass Studio, Foxford Woollen Mills, Carve-on, The Brendan Joseph Studio and Castle Arch Pottery.

We had received a ‘protocol document’ from the office of The President earlier in the week outlining the correct etiquette that should be observed, how to announce and address The President, when a red carpet is required, the formalities surrounding press and photography.

There we were briefed and ready to receive our visitor, gathered diligently at the podium at 10.50 as instructed, when Ray Power of Castle Arch Pottery said something that threw us into a mild panic!

‘How should one address the President’s wife?’ There had been no mention of that in the ‘protocol document’! For fear of causing a national scandal the event organisers bustled about with paperwork and emails and came up with an answer just in the nick of time…It’s ‘Mrs Higgins’. Few! Scandal averted we returned to our exhibition stand and waited for The President to call.

Karen Hennessy, Design and Crafts Council or Ireland CEO made the introduction and The President, his wife and I chatted casually about Thomastown, people we knew in common, the history and family behind Jerpoint Glass and they swiftly moved on to their next port of call in a flurry of camera lenses

The President recalled meeting with Rory a few years earlier and reminded me that they regularly give Jerpoint as a gift on State visits, including during their trip to Buckingham Palace in 2014. They were a very warm and charming couple.

During his opening speech, The President talked about the importance of having functional objects that are also objects of beauty and of how well received Irish crafts have been when he has given them as gifts around the world.

It was a wonderful uplifting visit from The President of Ireland and his wife, Mrs Higgins!